Clients so often ask me to put a cat in their paintings that it’s become a bit of a joke. Why cats? Just randomly, someone in Japan, someone in Russia and someone in Scotland all wanted cats in their commissioned work.

It got me thinking about how many times cats have sneaked into my paintings. So I’m going to share a few of these cats here. (note: The first five paintings show cats that made their own decisions to be in the pictures. I did not plan any of those cats.) 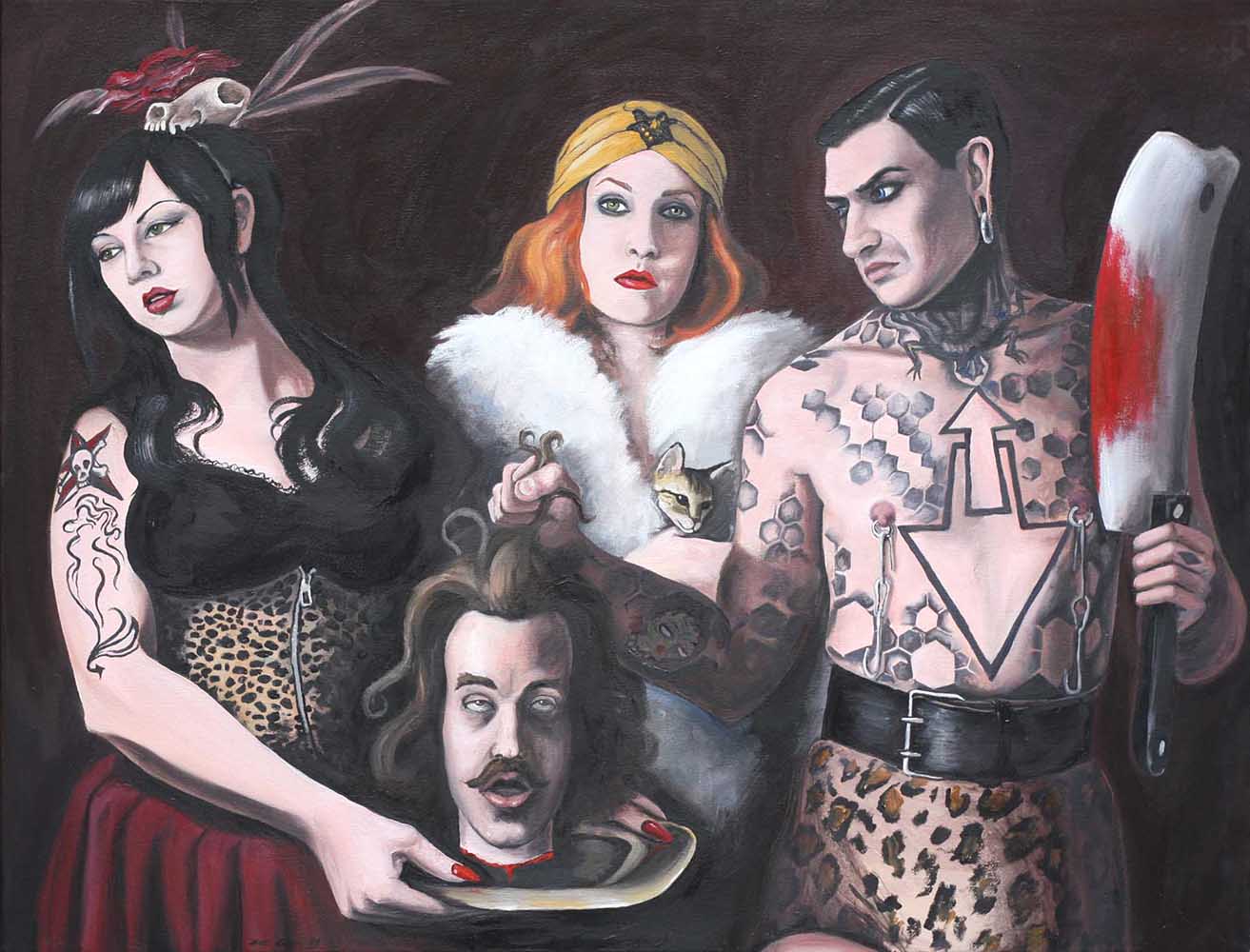 The Head of Duncan DeMorgan

The Head of Duncan DeMorgan, 2010. At the photoshoot, Missy Macabre was holding a kitten. I decided to keep the kitten in my version of Caravaggio’s masterpiece. I liked the cuteness of the kitten beside the horror of the severed head. 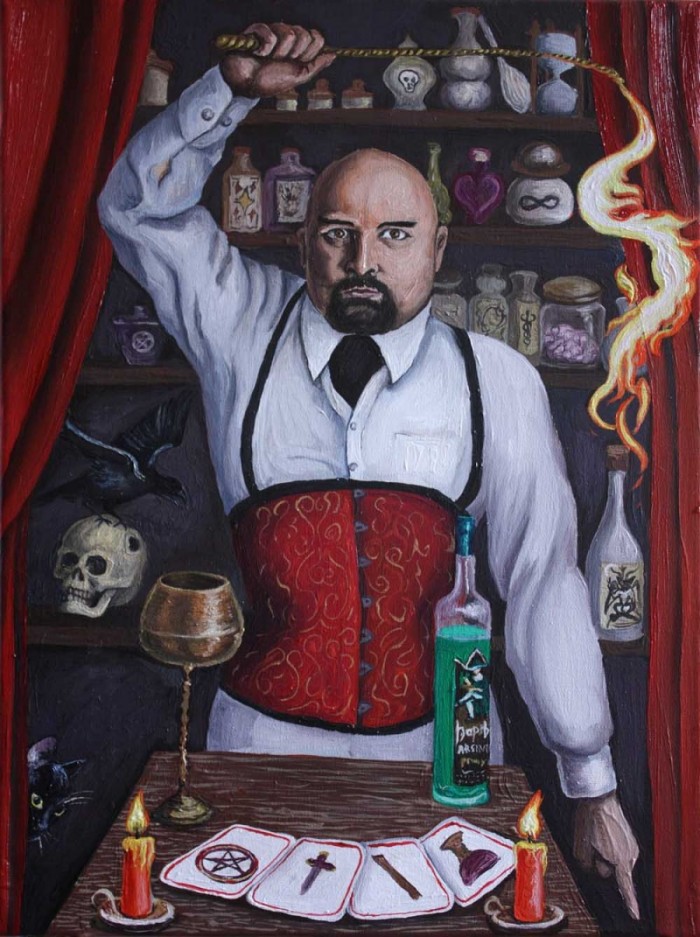 The Magician Tarot painting, 2012. When San Francisco based magician Paul Nathan came round my flat for the photoshoot, Brup of course, was all over the photos. Fortunately the cat recognized that Nathan was not an estate agent, and did not bite or scratch him. (Brup aka “Psycho kitten” had a reputation for attacking estate agents)

The Judgement of Paris

The Judgment of Paris, 2015. There are two studio cats, Spartacus and Artie, at Praxis studios in Stoke Newington where I now do photo shoots in London. Both cats are ginger.. so I would have to ask the Praxis staff which is which. Neither of them had balls, but for the painting I found a picture of cat’s bollocks on the internet. It seemed appropriate for the subject. 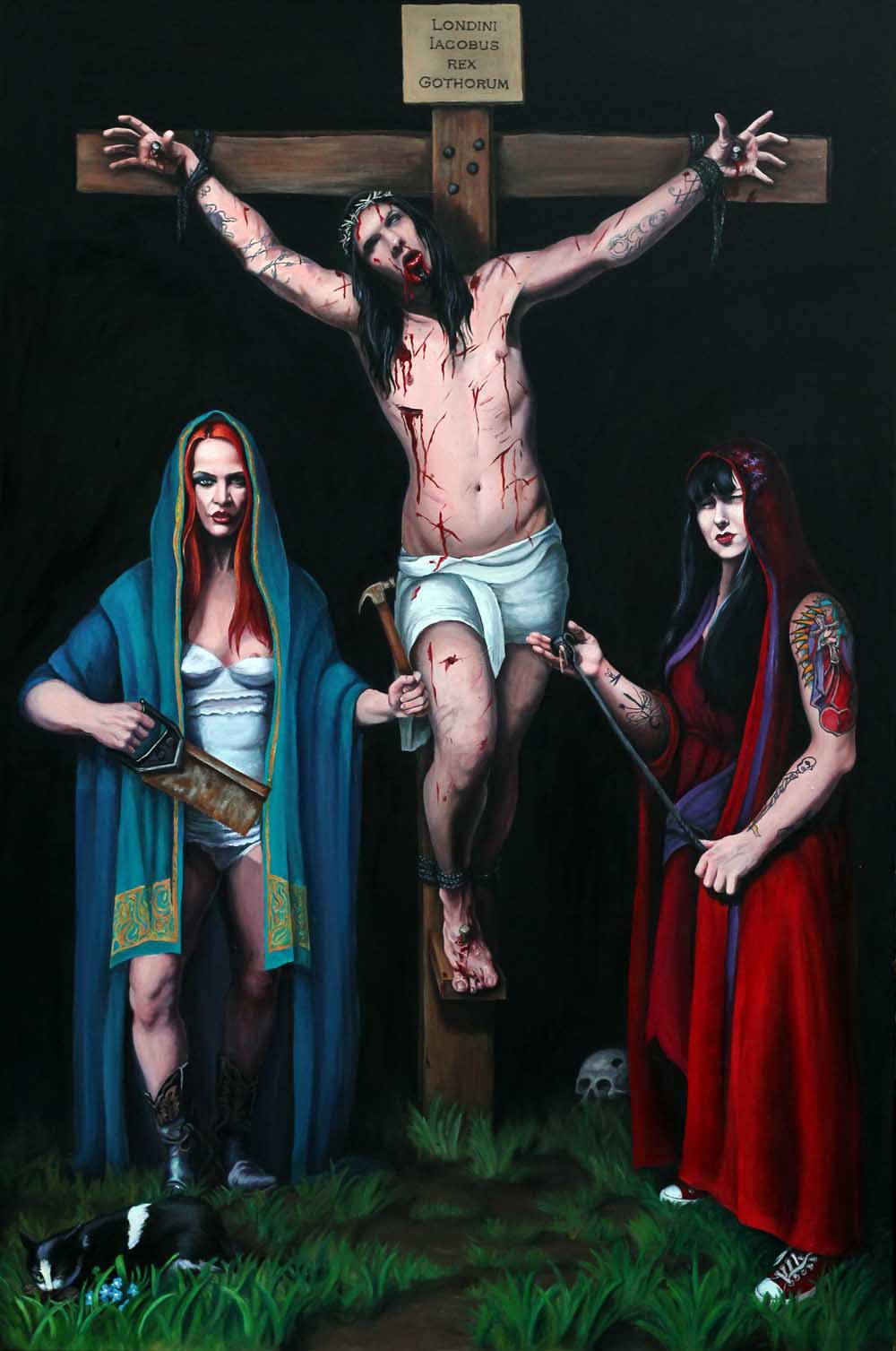 Backyard Crucifixion, 2016. Photobombing my painting shoots runs in Brup’s family. The black and white cat in this painting is Brup’s half sister/niece/cousin. I did the photo shoot in the back garden of the house where my cat was born, and where his mum and sister/niece/cousin still live. 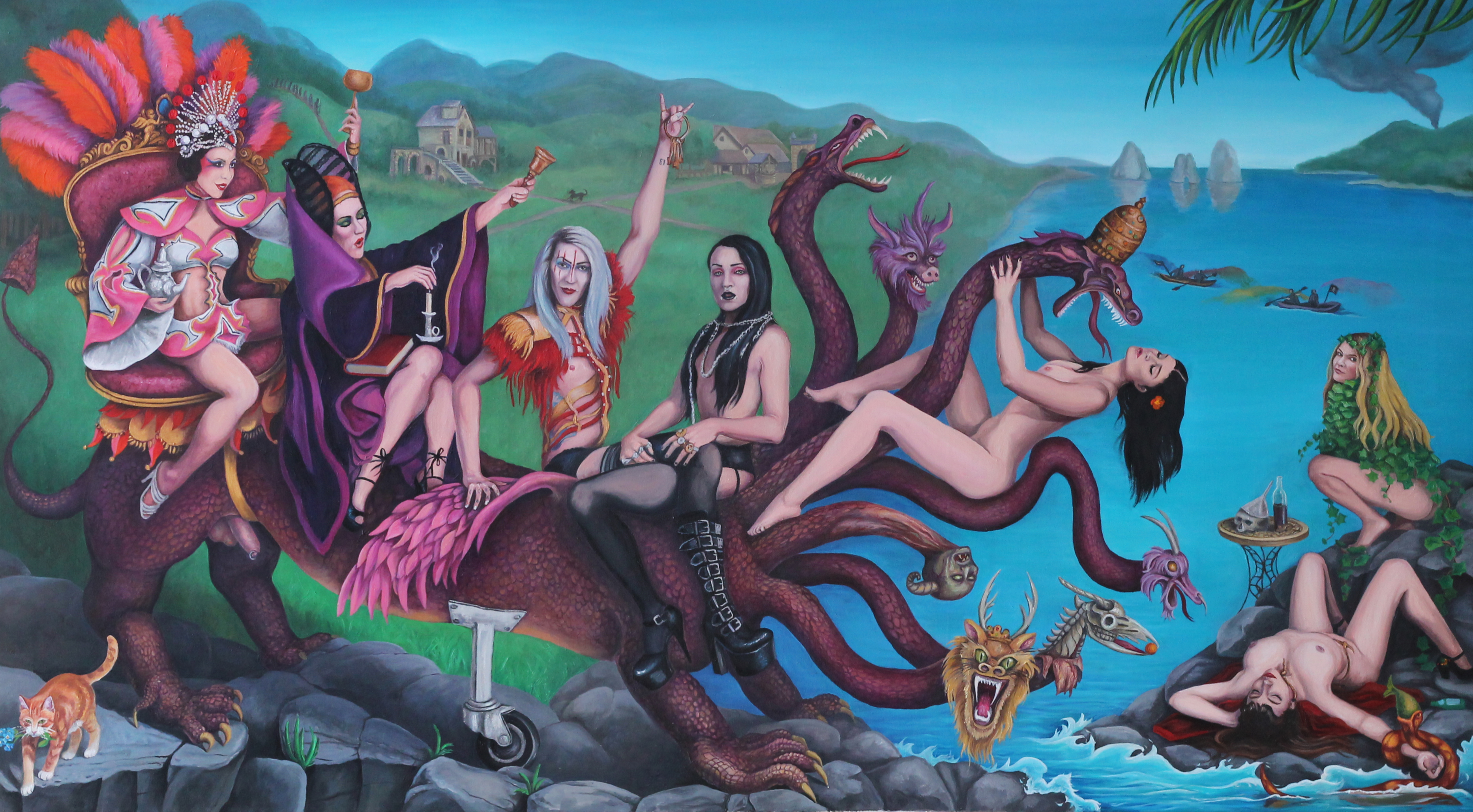 The Whores of Babylon, 2017. Back at Praxis studios, Artie or Spartacus is always around, ready to get involved in my photos. 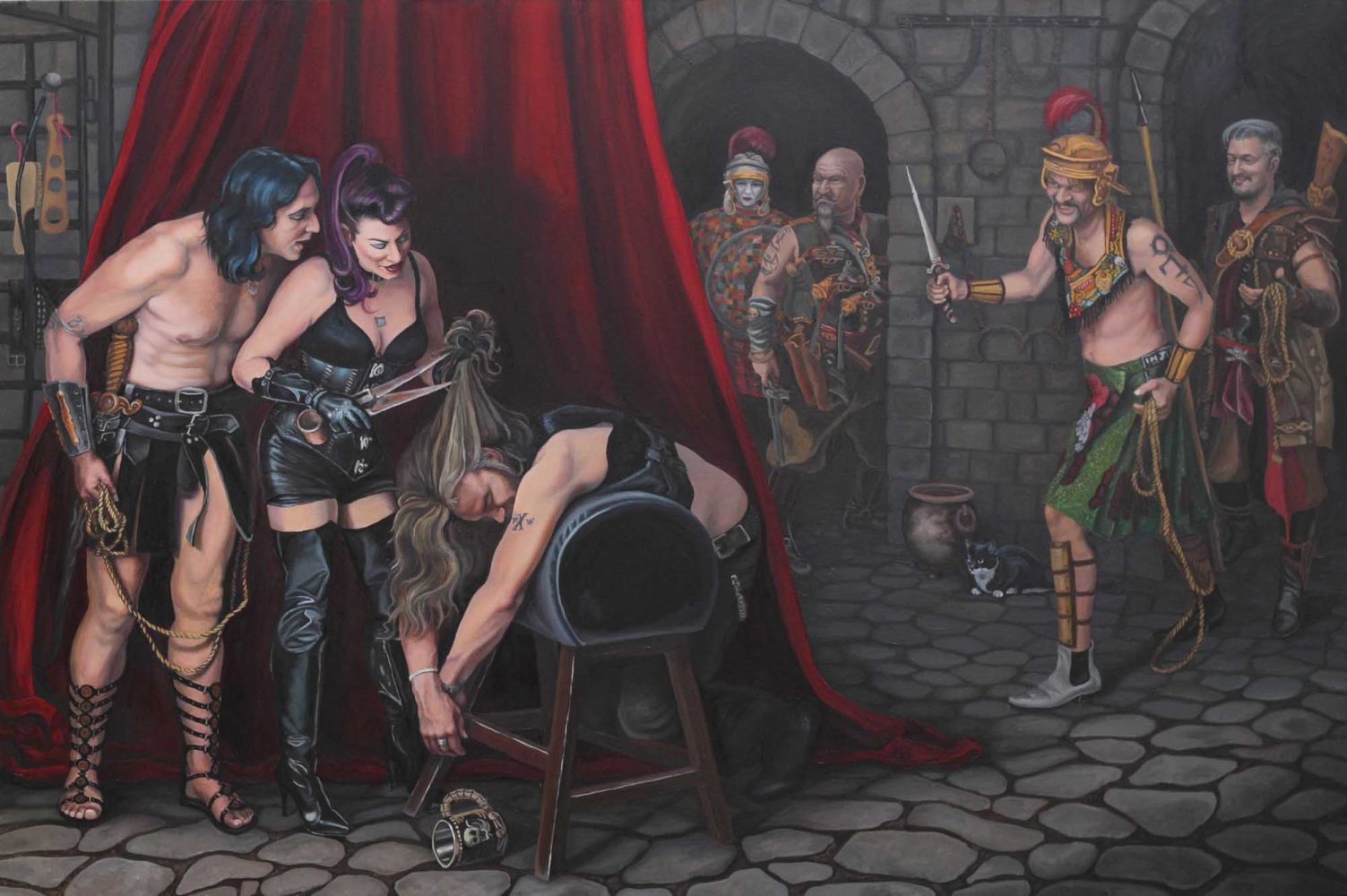 Samson and Delilah, 2019. “Roof Cat” is so named for his climbing across rooftops to visit model Juliet who plays Delilah in this commissioned piece for my Czech client. Roof Cat tends to hang out more on the roof than in the dungeon. But by now I had a bit of theme going on with cats so I put him in there. 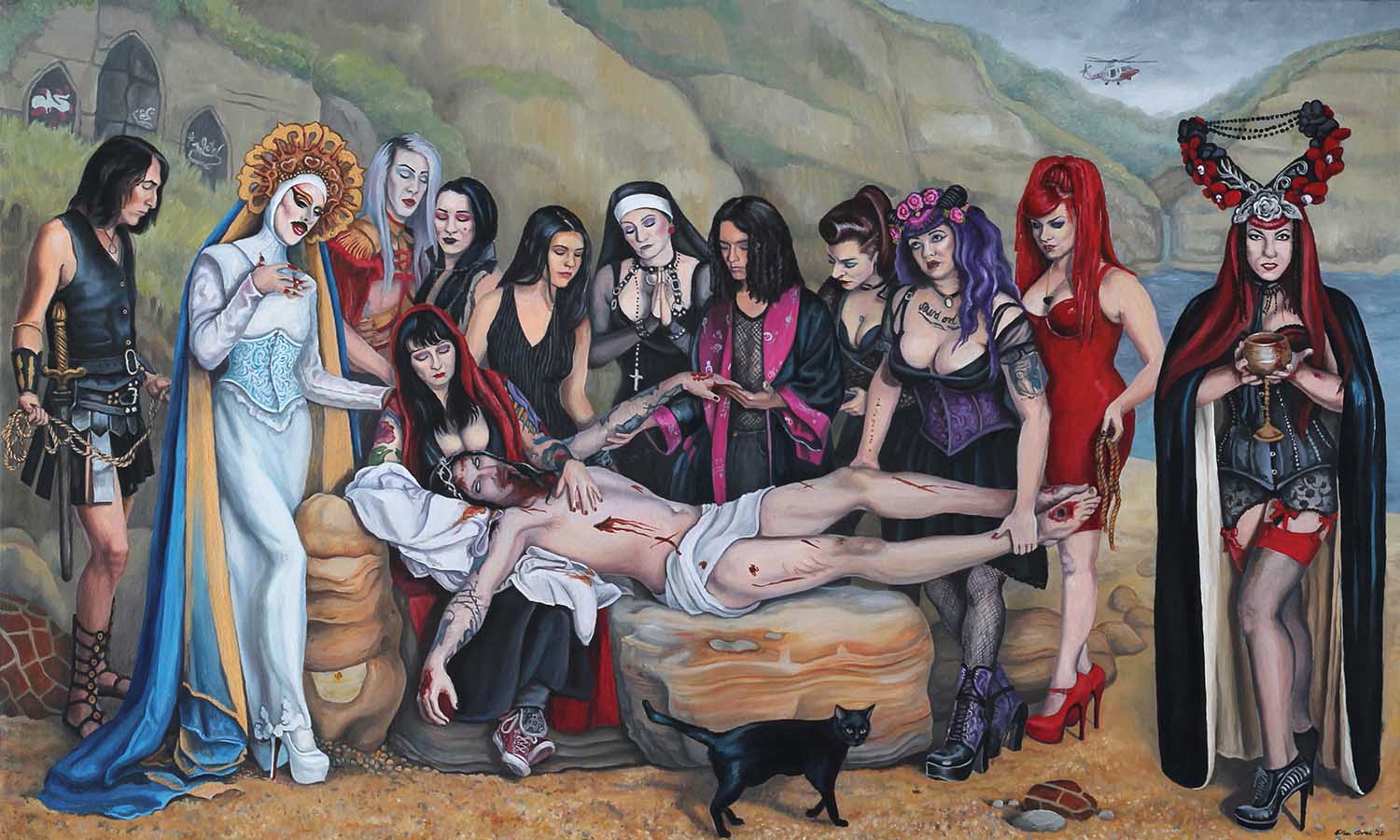 Park Bench Pieta, 2019. For continuity I included Brup’s sister/niece Moustache in the Pieta, even though I used a different Virgin Mary:

Here’s the commission I did for a client in Japan. He requested a cat but did not specify any particular cat, so I used my own ginger cat, Amber. 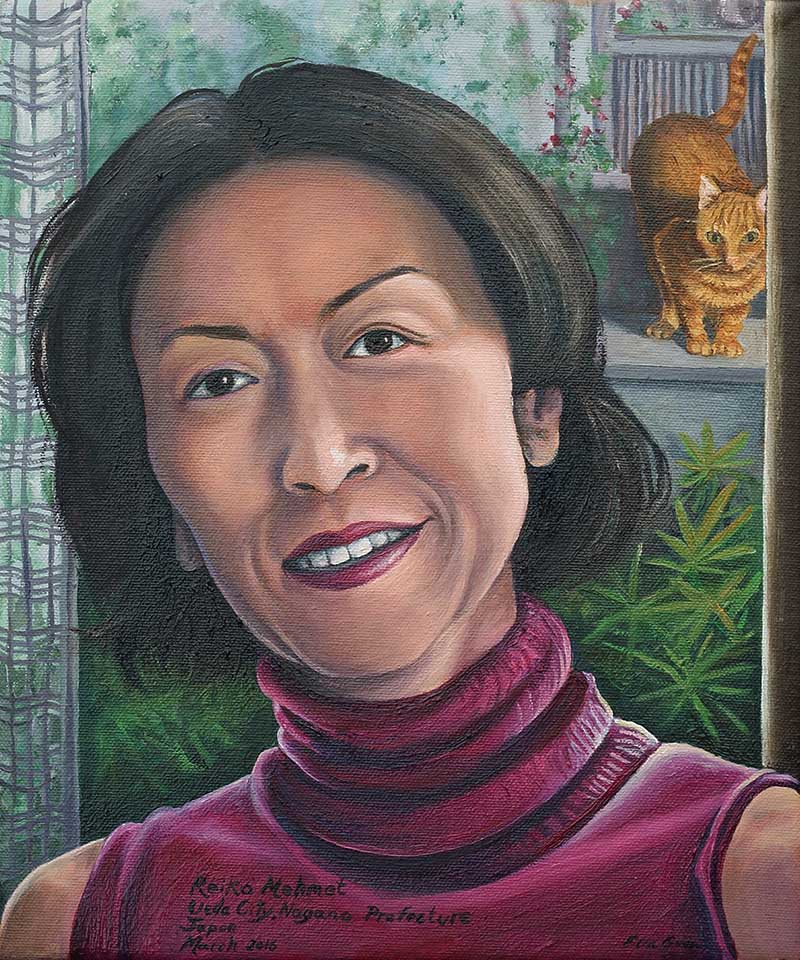 And Rosie up in Scotland with her dear old cat in the background: 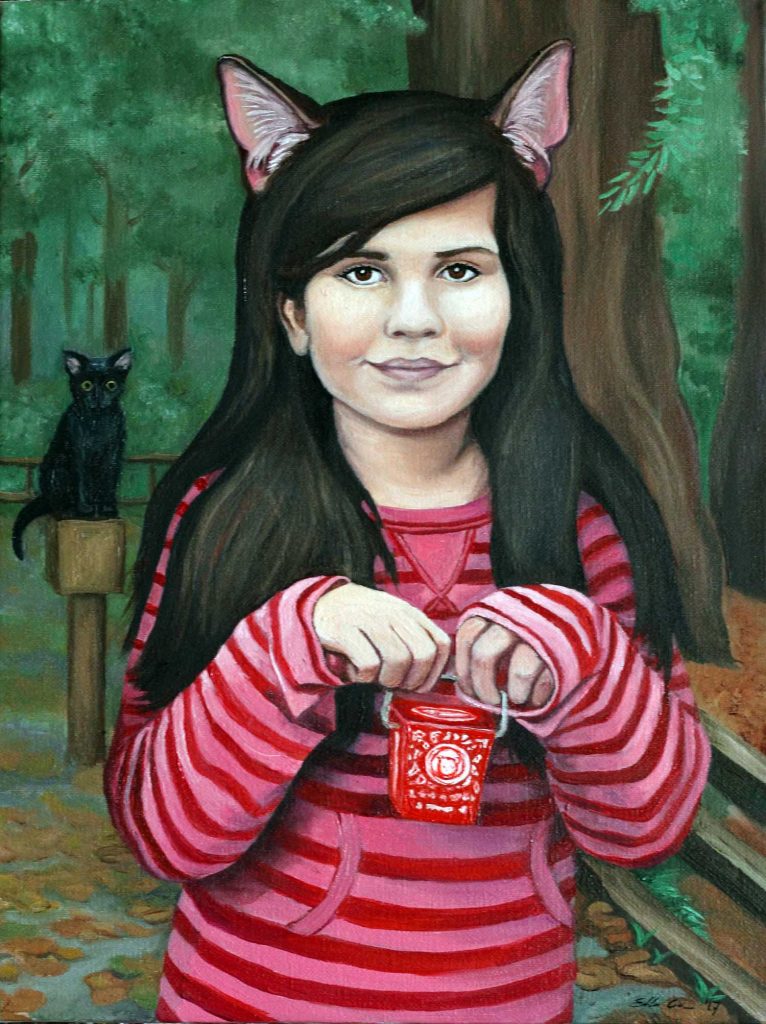 I am currently (as of April 2020) working on a large painting where my dear Brup has appeared again. I will add it soon to this page! Although in this case Brup was not actually at the photo shoot.

If you still have an income and aren’t too stressed out by working, feel free to contact me to discuss commissions with or without cats.

p.s. I will do a similar blog post for dogs soon!