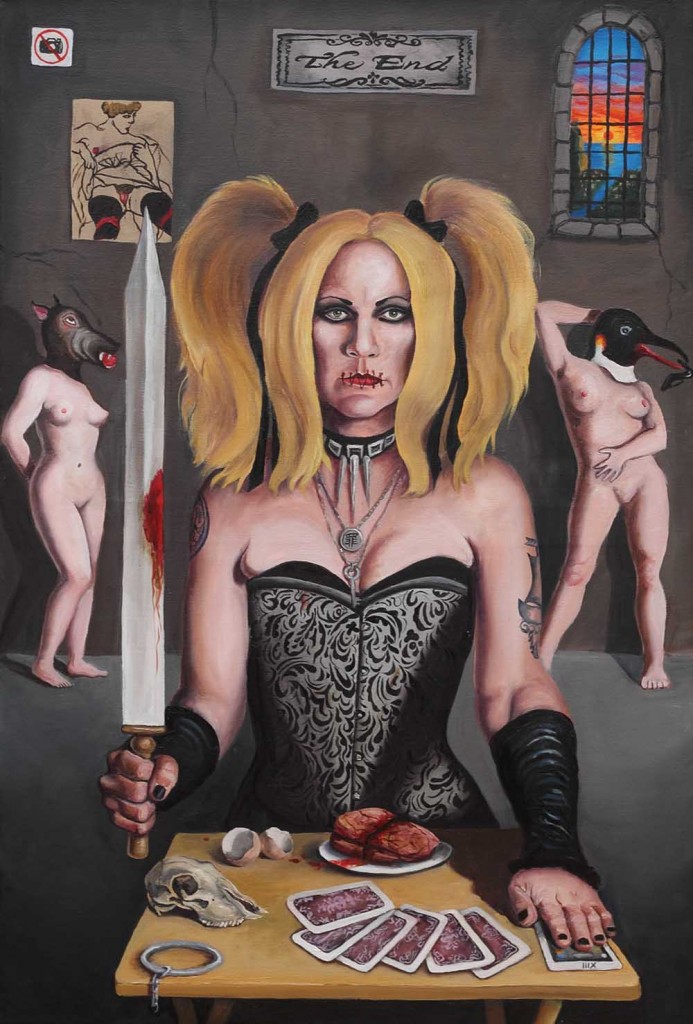 “The End” from an old silent movie flashed before eyes during an insomniac night in a Victorian guest room. The end of what?

The end of my journey painting the Major Arcana. The Death card represents an ending but also a new beginning. Perhaps this is my final farewell to my city of 23 years: London. And outside, through the window, my new beginning on the coast. It has not been easy making such a drastic life change.

The Tarot cards document the move from London, from the Fool deciding to take the leap, through the despondency of the Hermit with his light of hope, through the Hanged Man’s utter destruction, to the collapsing cliffs of Rock-a-Nore in the Tower Card, and finally, to the Sea and the Sun card.

But the cards are face down and my lips are sealed. Paintings and Tarot cards hold riddles, some never to be uncovered. There is only a glimpse of card number 13: the card of change.

The heart is from my painting Baked Velasquez and the sword was being carried by a gladiator on Hastings Bonfire Night.

I recently saw the Egon Schiele exhibition. And two animal headed-figures from the Drawing and Dancing Society pose in the background. I like to swim and dance in the penguin head.

The key around my neck is symbolic of a prostitute. Artists often compare themselves to prostitutes, selling their souls in pieces for cold, hard cash.

There are fragile eggshells and the skull of a young animal found on the destroyed island of Montserrat. The frailty of life itself. Death lasts forever. Life is fleeting.

Thus ends one chapter, and begins a new.