I paint the nightlife of London’s cabaret and burlesque scenes. I work in traditional oil paint on canvas, taking inspiration from clubs like The Last Tuesday Society Masked Ball, Gypsy Hotel, Shore Leave and the Lucha Britannia Mexican wrestling shows. I particularly enjoy gender confusion, and the idea of changing one’s identity through make up and costume. I was a founding member of the Stuckist Art Movement in 1999. I have exhibited worldwide independently and with the group. Born in the US, I have been a resident of the UK since 1990. 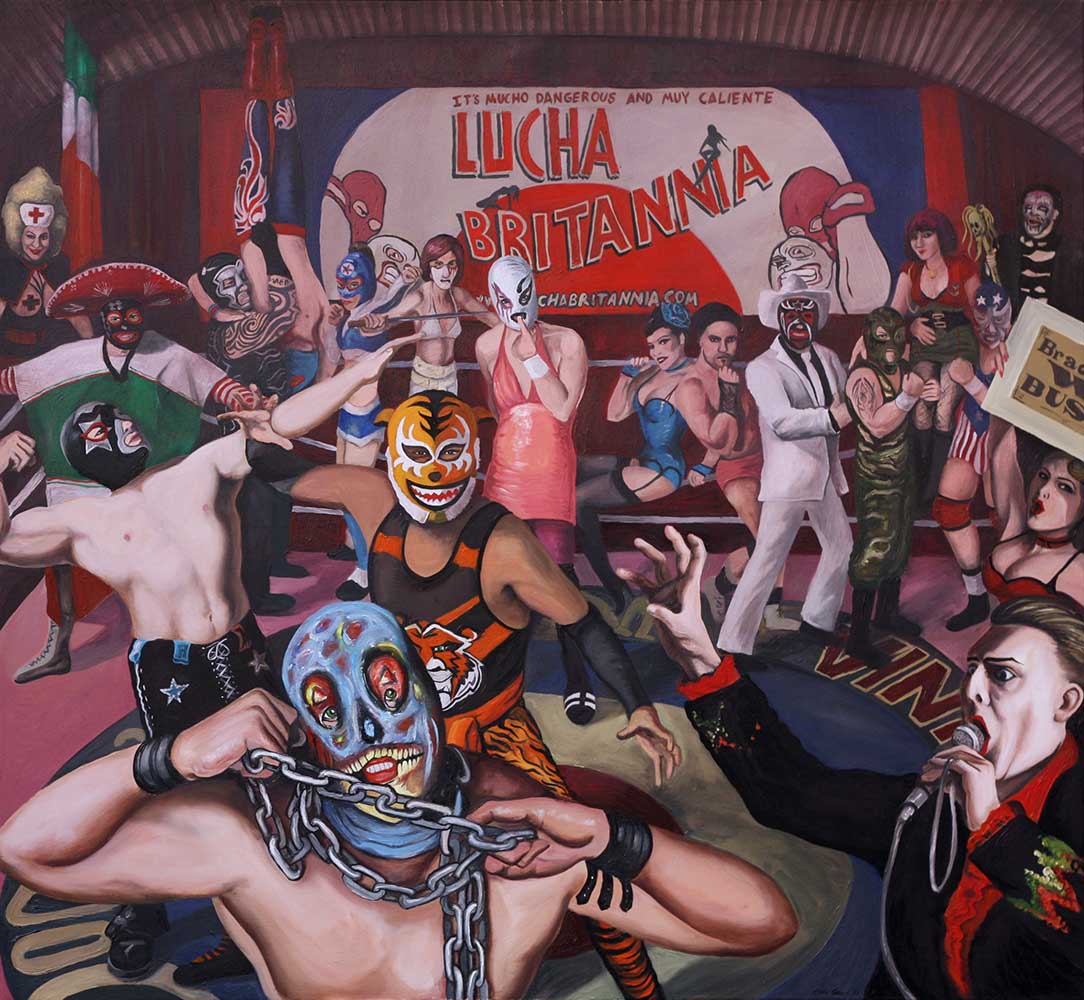 (I find these “biog” things difficult. So here is some info pieced together from several biog sheets from different exhibitions…)

I also take inspiration from painters Caravaggio and Velázquez, moving elements from their masterpieces into a 21st century setting. The Head of Duncan DeMorgan is based on Caravaggio’s Head of John the Baptist and features The Baron and Missy Macabre. It also includes Cabaret and Burlesque Performer and DJ Amanda Mae Steele as Salome, and DJ, Musician, Party-Facilitator, Decadent and Bon Viveur Duncan DeMorgan.

Duncan turns up again in Baked Velázquez, dining in a crypt with members of gypsy-soaked-bourbon-blues-band the Urban Voodoo Machine, and a deceased dwarf. I didn’t know any living dwarves personally at the time of this painting. So I included an homage to guitarist-actor Lenny Fowler, who was eating fire when many of today’s performers had yet to light their first match. I include some family heirlooms, and a skull with an olive in its eye socket, a hidden reference to an acquaintance who unwittingly lived with a corpse named Olive for 8 months. 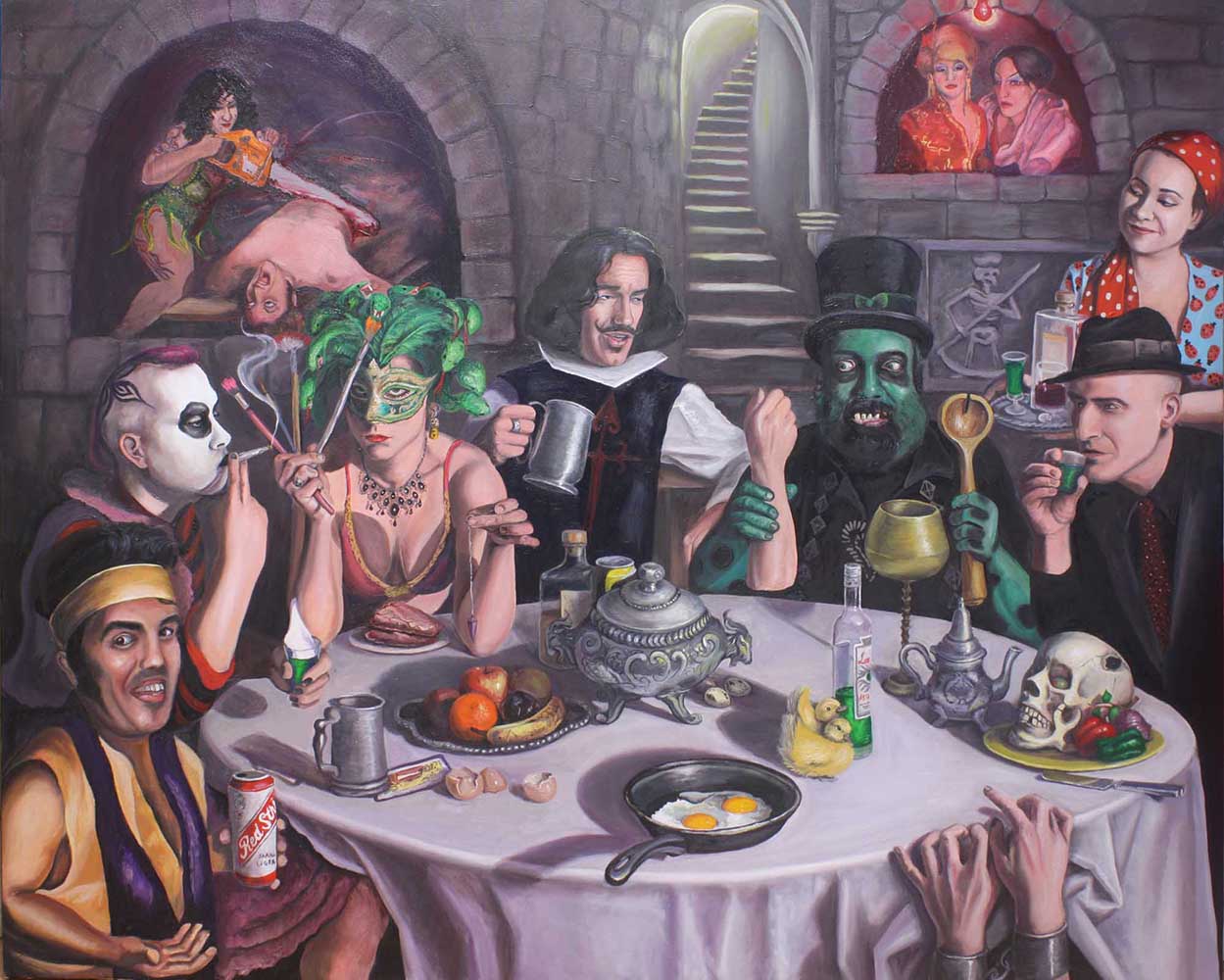 DeMorgan resembles the Spanish Court painter Velázquez so much I had to parody the painter. However, Baked Velázquez is not a copy of a specific painting, but a of many great historical paintings of Bacchanal delight. I even brought in Marisa Carnesky doing the sawing-a-man-in-half trick, but because it’s a painting she is really sawing the man in half, no trick at all. Add some Dutch transvestite prostitutes and you have a self-portrait in Hell. And my heart on a plate.

Resistance Gallery’s Lucha Britannia wrestling team are also a big feature in my work. You will find several paintings of wrestlers along the way. Though curiously my first wrestling painting was of my childhood friend Maura, who took up wrestling while living in Seattle. “Female Wrestlers” is probably the only large canvas that I have done where I did not take the reference photo myself. Maura’s picture was too good to resist painting. 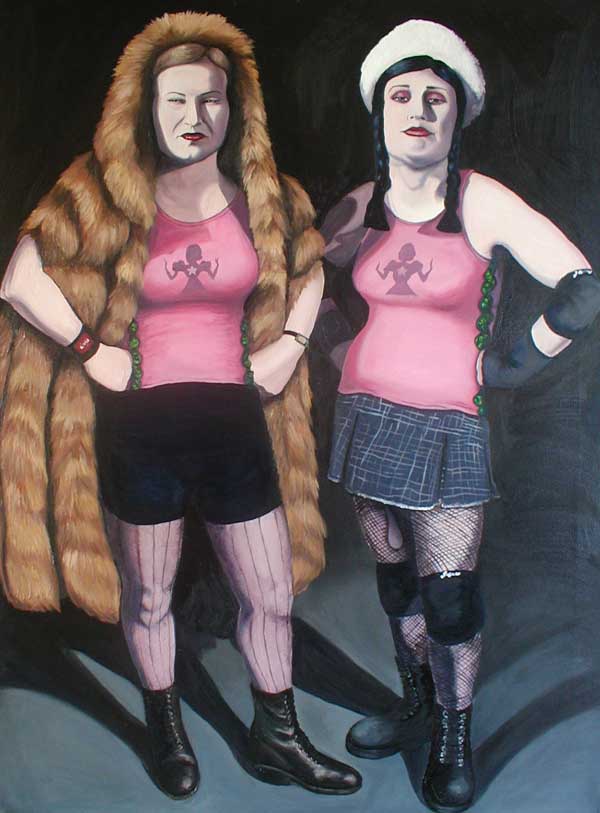 I have been working on a Tarot Deck since 2012. At Paris Stuckist Elsa Dax’s instruction, 22 Stuckists painted a card each from the Major Arcana. I painted international magician Paul Nathan as the Magician card. It was the beginning of a long journey, only about to be realised in 2014.

I have exhibited widely with the Stuckists and with other groups and individuals, most notably Outsider Artist and Fabulous Fasionista Sue Kreitzman. I have exhibited in the US, UK, The Netherlands, Iran, France, Germany, and Australia. Please see my CV for more details. 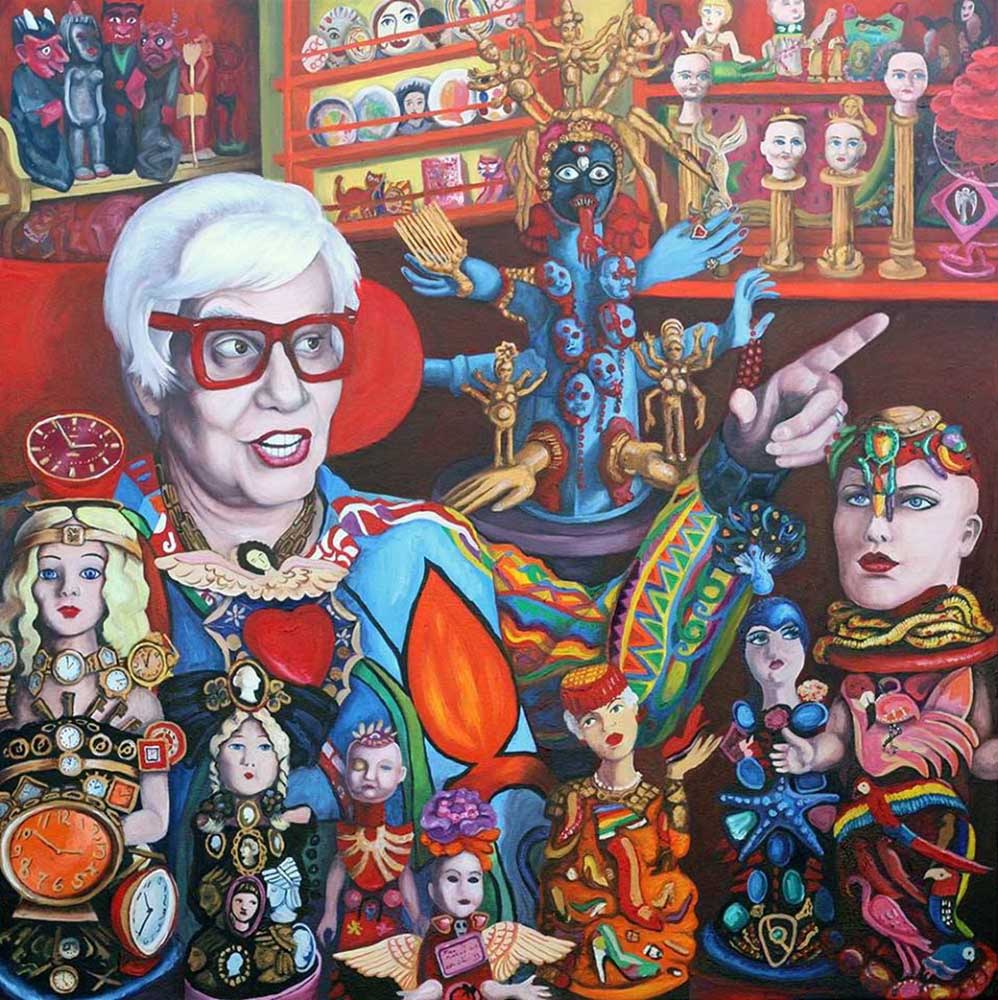 Time is running out

In 2013 and 2014 I have been working on commissions for clients in the USA, Cuba and the Czech Republic. Some of the paintings have been remakes of older paintings. I will never paint the same painting twice, but I do make other versions, so, if you are interested, please contact me. I can pretty much paint anything as long as it doesn’t depict racism or violence towards a specific person or group of people.