Painting your life and your dreams

Posted by Admin on May 11, 2016 in Painting blogs, Project blogs

I have been doing commissioned work for as long as I can remember. Here I will highlight the great variety of the projects I’ve done over the years, up through 2016.

The Von Stockhausen family have portraits dating back centuries hung in ornate frames on the walls of their manor house. Mary Von Stockhausen sat for me in London, shortly after opening the first Stuckist Centre in Germany in the early 2000s. She did not mention her heritage at that time, and appeared to be living her life as a humble Stuckist. It was only when Mary’s mother flew me to Germany to paint Mary’s sister Lizzie, that I squinted at the address and wondered why there was neither street number nor even street name, only a house name and village name. “Is it.. a castle?” I wondered. Mary’s family took a bold step in continuing the tradition of portraits in a Stuckist vein. It was the ideal way to have both a painting and something contemporary.

Both sisters’ portraits are done in acrylic, as they were done quickly from life sittings. I usually work in oil.

I have painted some people’s beloved deceased pets, using old photographs, as well as living pets, including an alpaca. I have also painted people with their pets. The pets are usually photographed separately. Try herding cats and you will see why! I have even painted a Dodo on request. Quite a challenge as I had to use old photographs and toys for reference.

Showing the great diversity in my abilities, I have painted the cover for bourbon-soaked Gypsy-blues bop’n’stroll band the Urban Voodoo Machine, as well as Jane Ruby’s latest children’s music CD, Flamingo Flamenco.

Only marginally easier to pose than pets, I have painted various children.

Why not get your guests to pitch in and commission a wedding portrait? Better than getting 50 toasters! And lasts longer, too. Traditional white weddings are fine, too. I can do anything. 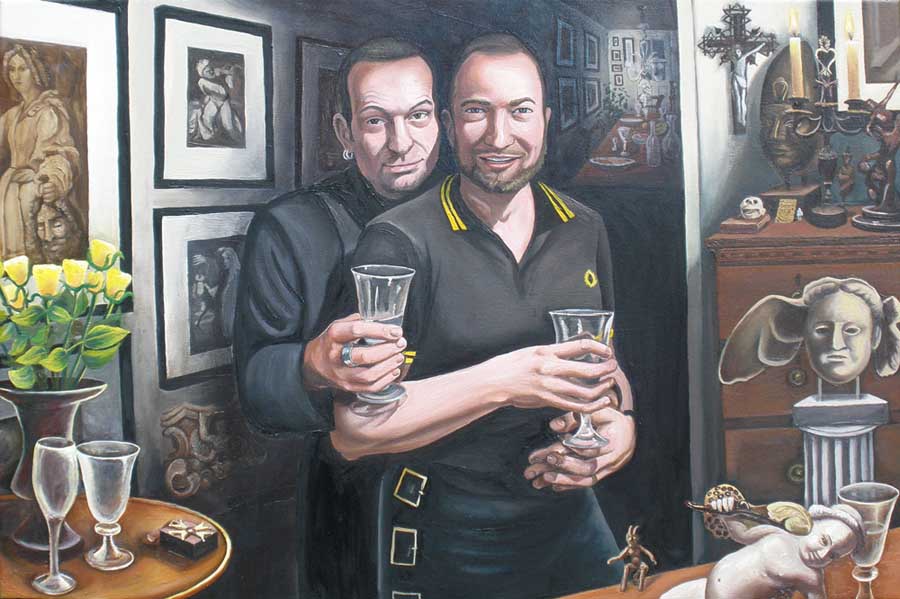 A few years ago I had the unusual job of painting the circumcision of Christ. In these turbulent times, with child protection hysteria, it was a challenging subject. My friends Dawn and Rick Hollingworth kindly volunteered their daughter (yes daughter) for the role, posing as Mary and Joseph themselves. The rest I made up from observation, rather than risking having any questionable photographs on my computer. Interestingly the public reaction sparked a discussion on the barbarism of the ancient practise, and nothing about the lack of clothing on the baby.

I have also painted the Judgement of Paris, with the figures as described by the client placing the order: tattoos, glasses, and “ornate by many jewels.” The client also commissioned “tattooed Adam and Eve” and the Diana and Actaeon myth with a contemporary twist.

Your entire life on one canvas

When my friend Lynne Gillett left London after 23 years, she wanted a painting encapsulating as many aspects of her city life as we could fit on to an 80 x 100 cm canvas. She has her friends; well known landmarks that mean something to her; performers and bands; and on the table, a book about the Peopling of London, as Lynne had been working with refugees. 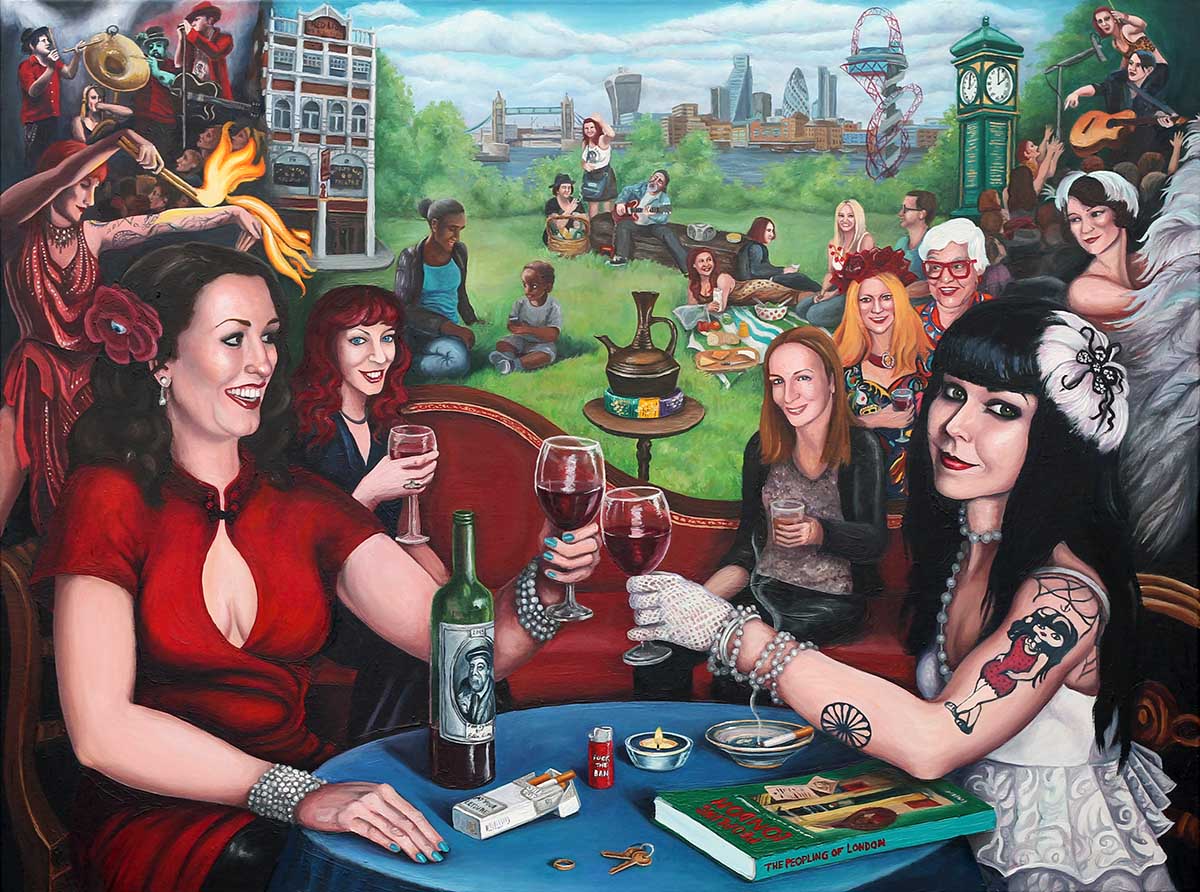 Please contact me for enquiries. No job too big or too small; no subject matter too outlandish.