The Quest for a Pole 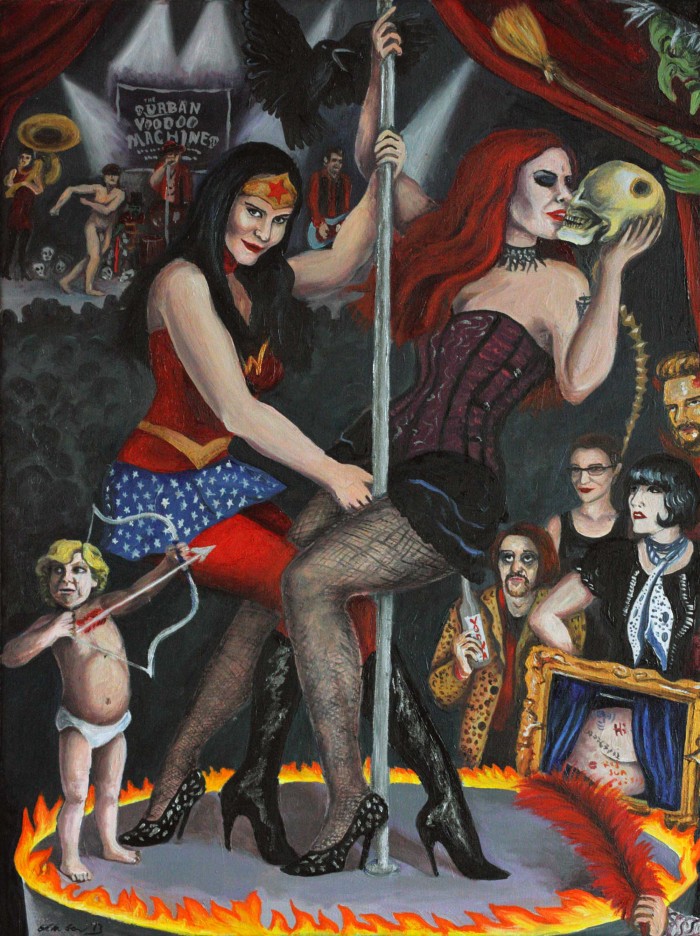 My client often requests versions of paintings I’ve already done. I can change the picture enough to keep it interesting for me, as I can’t really recreate an exact copy. The original Lovers painting is 40 x 30 cm. The new one is going to be 150 x 100 cm.

For reference for the original I used a mixture of dark, out of focus photos from the actual event and reference from the internet. To make a bigger version, I need new photographs.

I know so many burlesque performers, you’d think this would be easy. But somehow the Pole has eluded me.

There is a pole in Bath, in the home of a sexy, athletic model whom I have painted often. She has the right lighting, right space, the pole, and her good self. The only drawback is…. Bath. In theory I’d love a little visit to the old spa town, but it’s quite a chunk of time to take out of the actual work day, just to travel there and back.

A few leads in London have come up with nothing so far… everyone who might have a pole has moved it somewhere else. I would have to contact people I don’t know and deal with whatever that entails. Not that I’m shy; it’s just a lot of leg work and again, time.

A few months ago my good friend Katharine and I went on a research outing to the Only Strip Club in the Village. A few people have asked why no pole came out of this so I will explain as best I can….

Club X (as I believe it’s called) is located down an alley near Hastings town centre. It was like stepping back in time to Florida in the 1980s. You weren’t allowed to take out a mobile phone, so there really was no evidence of the 21st century. Except perhaps the women punters. In the 80s, the classier places would sometimes attract couples, but here in Hastings a woman was on a night out on her own, exclaiming that she is a rampant lesbian and likes to get dances from the girls. And no one batted an eyelid at Kat and me, two women out to watch strippers. Definitely a plus for equality: women can go watch women the same way men do.

So here’s the deal: you pay a tenner just to get in to the bar, where there is a pole on a small stage, and a long bar, with the usual dim red-purple neon glow, bar stools, and then some leather chairs around the pole. Once in awhile a dancer will go on the pole for a song, but most of the time the pole is empty. The girls make their money doing “private dances” upstairs. (I know “girls” isn’t the PC term these days but I’m writing this like it’s the 80s… I remember the red neon sign outside a strip club in Columbus stating “girls girls girls.”)

The dancers were friendly, but that is because they were hustling dances. It was fairly early and fairly quiet. The girls were mostly milling around the bar talking to each other. Kat and I feel that if we’d splashed out on a dance, I might have got some response to my pole query.

We spoke with the woman who was there as a customer. She used to also work there and now does web cam work. She also used to have a pole but she gave it to her mate in Eastbourne. I gave her my business card. But here was the problem… not being able to whip out a mobile phone, I couldn’t show anyone my art work. There is one picture on my card, though now I can’t even remember if I HAD business cards on me or if I just wrote my number on a bit of paper. I didn’t have my printed book of paintings, the one I take out with me to show people. Since the smartphone works most places, I don’t carry the hard copy around much any more. So, when you say “I’m an artist” or “I’m a painter”, people assume it’s crap unless they see it. I recall about ten years ago when I first painted a transvestite named Davina. He hadn’t seen my work until I sent him the one I’d done from a photo of him sitting at a bar in Soho. He was gobsmacked. I don’t know what he was expecting.

So, anyway, even the lady who no longer worked at the club was not allowed to give me her number. She does web camming and lives in Bexhill I think, but her pole is in Eastbourne. Even if I tried to track her down, would she even be responsive? Having never been to a strip club as a punter before, I think my etiquette wasn’t all that good. The girls are there to make money. Not the place for starving artists to be recruiting models and poles, unless we were going to support the girls by buying private dances.

I did not speak with the bar staff or management. The place really had the feel of money making, and as I don’t have an extra budget for this, I can’t exactly pay for use of the pole. I guess I could phone them and just ask how much…. And if it’s less than a train ticket to Bath….?

Then there are the models. The original painting was of Romany and me at the 2013 Last Tuesday Society Halloween party. We were drunkenly dancing on a pole together, though the only photos of this are very far away, dark and fuzzy. Romany is in London. How I’ve not found a pole in London yet, I have no idea..

I’ve got to start using models in Hastings, but the one that I had in mind is out of town indefinitely and I need to shoot this next week really. A local friend has a Wonder Woman costume but how to tell her politely that although she is totally gorgeous, she’s not quite the right look for this project…

And then there is another, much darker, layer to this painting. Even when doing commissions, especially a commission that is very much my own work, there are all these layers of hidden meanings. And this painting in particular has a chilling omen, of which I was unaware at the time.

When using references from the night, there was a dark shape hovering above the crowd. I couldn’t tell what it really was, so I made it a crow. It seemed apt for the Tarot card. The Lovers is about choice and warnings about the wrong choice.

The painting captures a moment in time now lost. A wild weekend when anything was possible. Euphoria was the feeling banded about by my young French friend Laura, who was also visiting London that weekend. The Urban Voodoo Machine, our favourite band, were headlining the party. A streaker got on stage when they were playing. The crowd were dressed to the nines in Halloween gear. The atmosphere was indeed euphoric.

There were many rooms off the main stage area of the Coronet Theatre in Elephant and Castle, where the party was held. In one of the rooms, Ben Hell, She Rocola, Almande Magdalene and I were doing our Arse of Almande interactive installation. Inspired by my earlier Devil painting, Almande’s arse was on display in a box hidden behind blue velvet curtains. She Rocola held a dial and I a silver teapot; a punter would put a pound in the pot, spin the dial, and the curtains would be opened. They would then follow instructions based on the dial: tickle, spank, draw on, kiss, etc. This piece of art/arse was great fun, and part of that wonderful evening.

In this blog (http://www.collective-evolution.com/2016/04/24/have-you-been-seeing-crows-what-the-crow-symbolizes-more-than-just-death/), the writer expands on the crow’s symbolism, concluding that, like the Tarot Death card, it means change rather than the end. However, one can not get away from that feeling of the crow as an omen. A mere few months after the painting was done, the musician who happened to be positioned directly under the crow was diagnosed with throat cancer.

It’s difficult to revisit the time captured in this painting. It feels like a time of innocence, a time when all was right and glorious, when we all celebrated music and dancing and dressing up, embraced hedonism, lived in the moment. What happened in the months and years after can not be undone.

So I want to change the painting… and perhaps there is some sort of fatalistic block about even beginning another version. There is so much pain there, and yet I need to think about the cycle of life rather than the cruel endings that are so out of our control.

So, it’s not really a painting about pole dancing. It’s about life and death. Maybe that’s why i’m having trouble finding a pole.